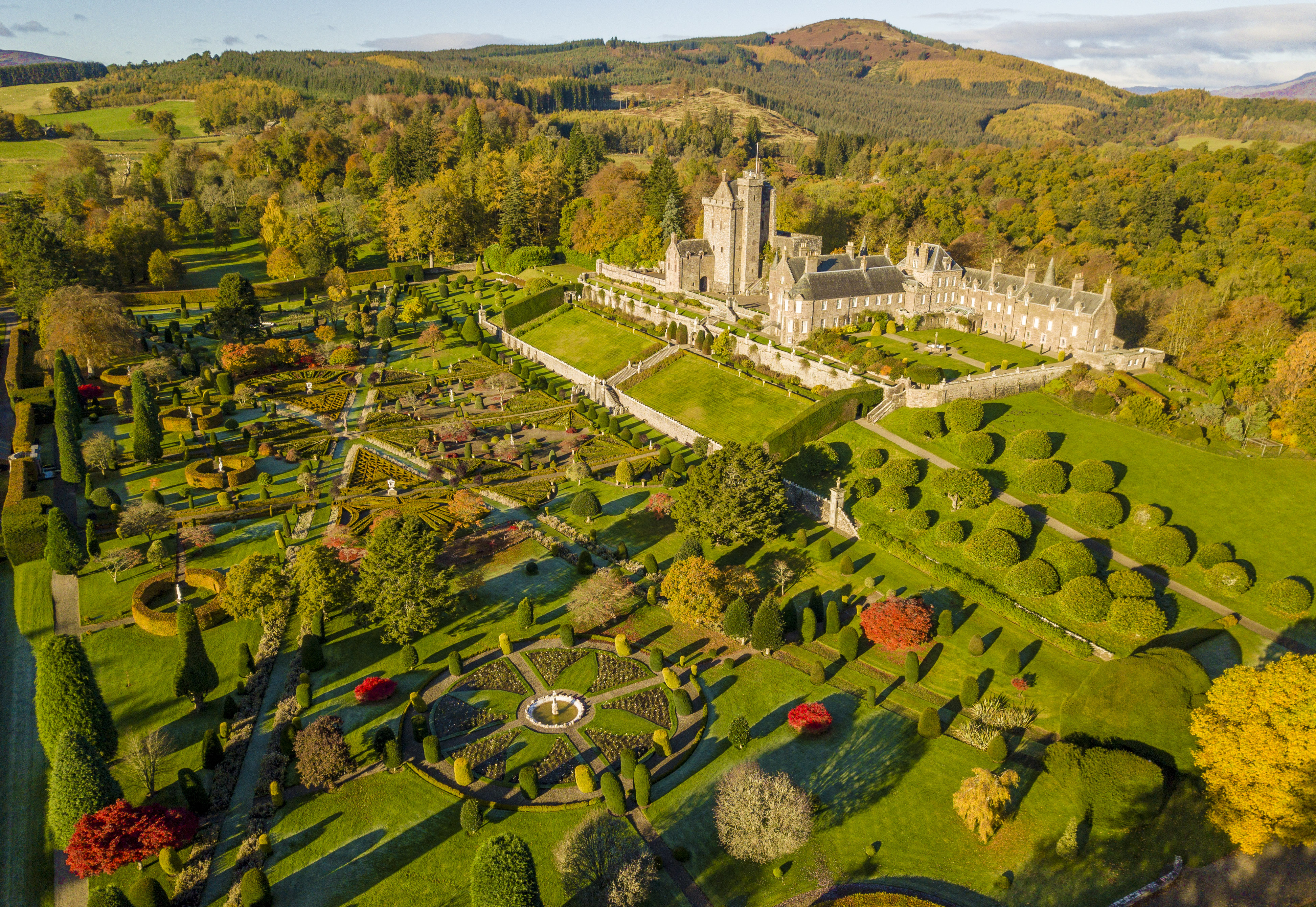 Posted at 16:29h in Uncategorised by Claire Wallace
0 Likes
Share

Lovely article about the gardens in the Mailonline

By LARA KEAY FOR MAILONLINE

Drummond Castle Gardens, near Crieff, Perth and Kinross, date back to 1630 and are described as ‘one of Europe’s most important and impressive formal gardens’.

The ornate gardens were redesigned and terraced in the 19th century and the formal gardens seen today were replanted in the 1950s, preserving the original features.

These drone pictures show the extraordinary geometric design of the gardens, which feature 11 miles of box hedging and welcome more than 20,000 visitors each year. 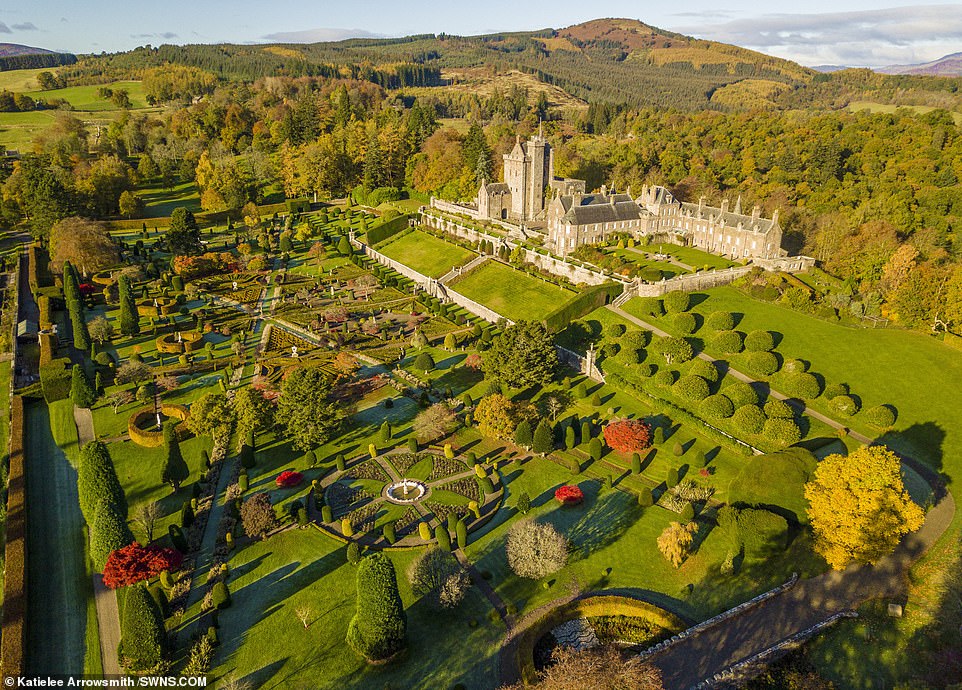 Drummond Castle Gardens (pictured from above), near Crieff, Perth and Kinross, Scotland, date back to 1630 and are described as ‘one of Europe’s most important and impressive formal gardens’ 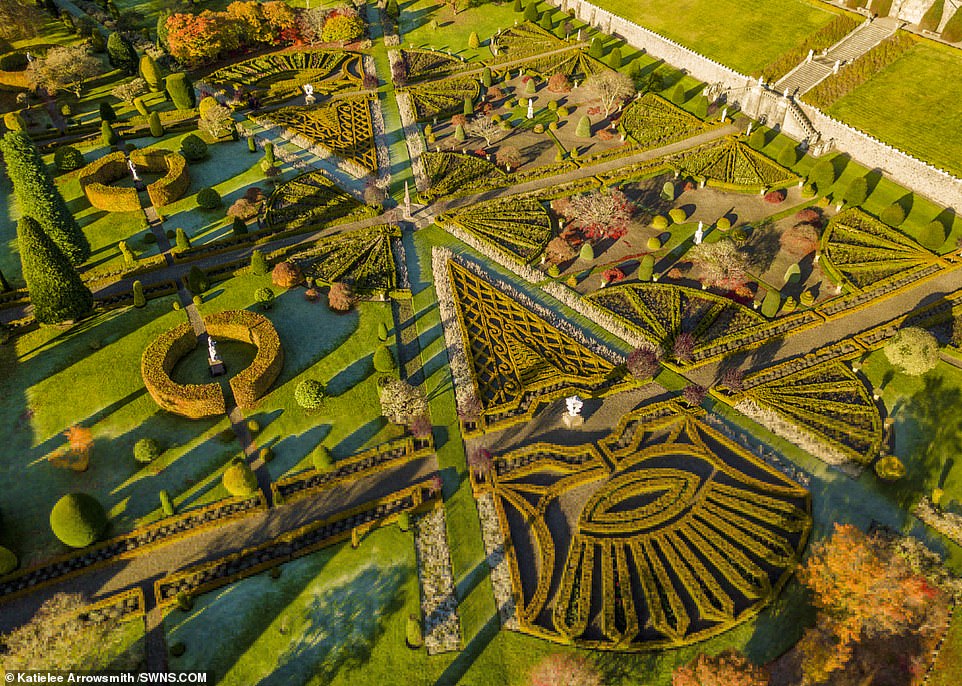 The ornate gardens at Drummond Castle were redesigned and terraced in the 19th century and the formal gardens seen today were replanted in the 1950s, preserving the original features 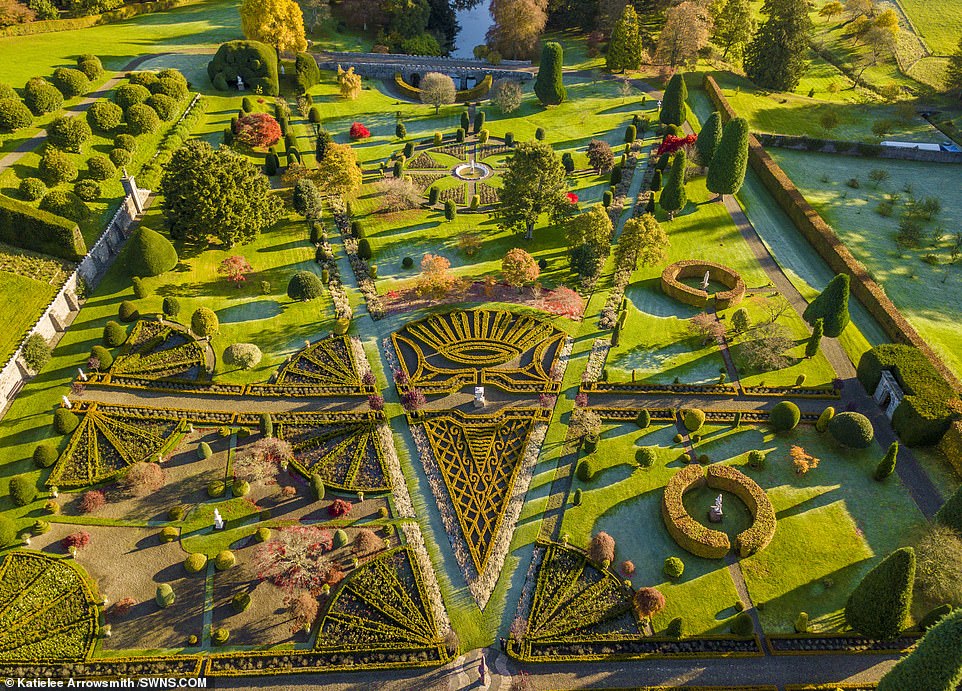 These stunning drone pictures show the extraordinary geometric design of the gardens at Drummond Castle in Perth and Kinross, Scotland, which feature 11 miles of box hedging and welcome more than 20,000 visitors each year

In 2016 the gardens were transformed into the backdrop for the Palace of Versailles for popular drama Outlander, and they also featured in the Rob Roy film.

Head Gardener, Edith Barnes, who has worked at Drummond for 38 years, is assisted by four full time gardeners and up to five part time at any one time.

A garden spokesman said: ‘Drummond Castle Gardens in Perthshire is probably one of the most famous gardens in Scotland, having featured in both Outlander and Rob Roy starring Liam Neeson.

‘Head Gardener, Edith Barnes looks after 11 miles of Box hedging, beds of roses and a stunning autumn display of colourful acers and maples.

‘This beautiful 19th century restoration of an original 17th century garden is open from Easter to the end of October and receives over 20,000 visitors each year.’ 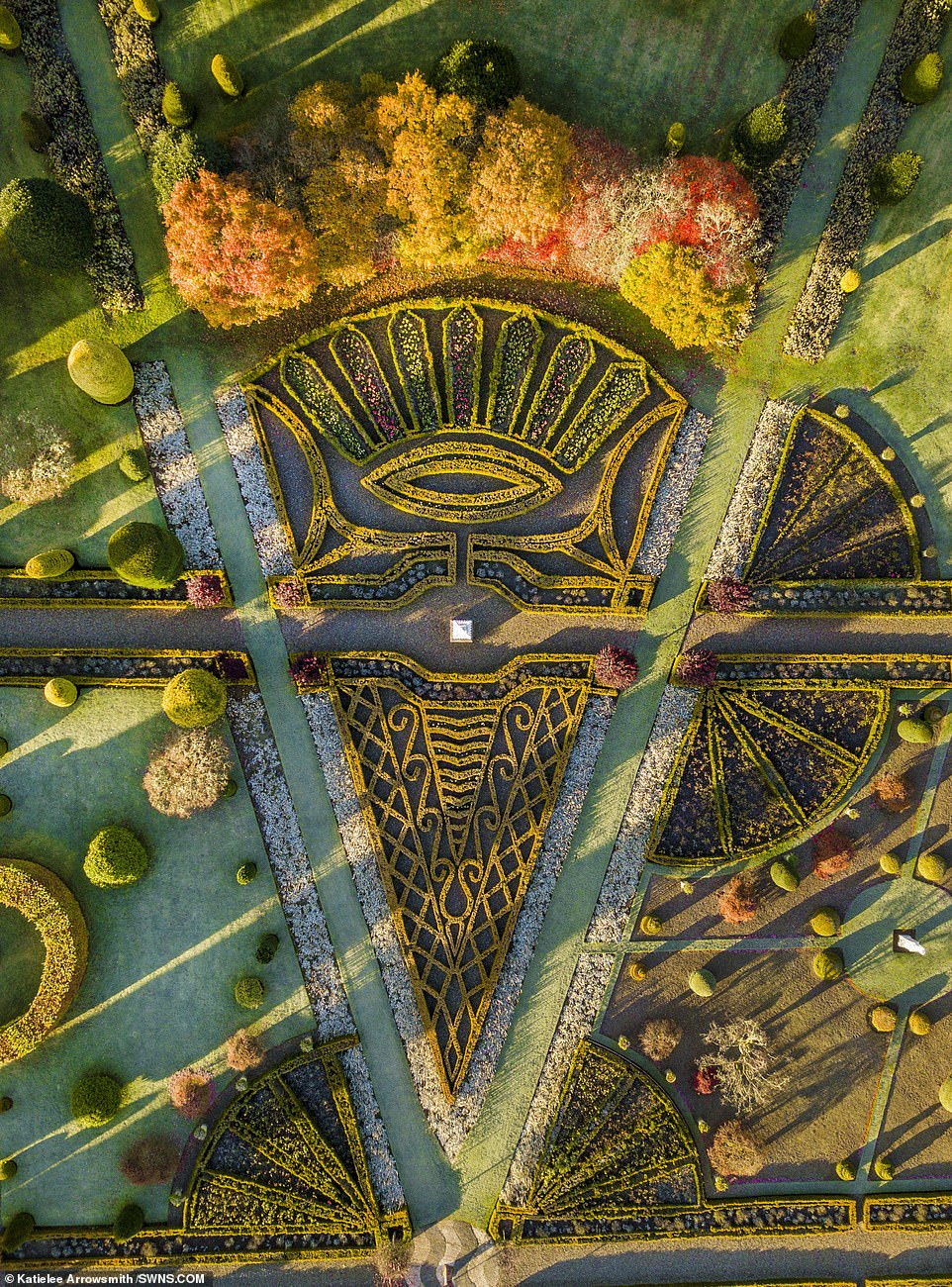 Autumn sun: Head Gardener, Edith Barnes, who has worked at Drummond Castle for 38 years, is assisted by four full-time gardeners and up to five part-time at any one time 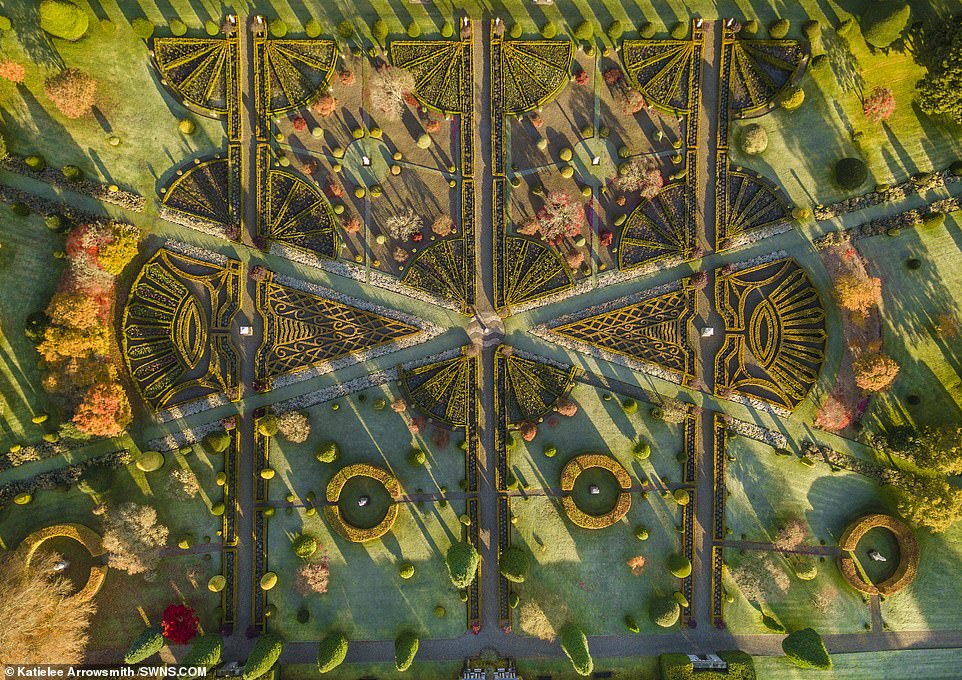 Drummond Castle Gardens and its history

Drummond Castle is a Historic Scotland Category A listed building located near Crieff in Perth and Kinross, Scotland.

Its origins date back to the late 15th century when the original house was built for John, 1st Lord Drummond around 1490.

Its impressive grounds have all the characteristics of a 17th century Scottish Renaissance garden, but were restructured in early Victorian times and renewed again in the 20th century when the garden framework and the exceptional interest of the original 19th century design were carefully preserved.

They are often described as some of the most ‘impressive and important’ gardens in Europe.

After the castle was built in 1490, the 2nd Earl, a Privy Councillor to James VI and Charles I, succeeded in 1612 and is credited with transforming both the gardens and the castle between 1630-1636.

The keep still stands but the rest of the castle was restored and largely remodelled by the 1st Earl of Ancaster in 1890.

Early records mention Lord Drummond sending cherries to James IV in 1508, when the monarch was hunting in nearby Glen Artney Forest. The 2nd Earl must have owned a significant garden and the presence of the sundial (installed in 1630) goes some way to confirming this.

Towards the end of the 17th century the 4th Earl was credited with planning and beginning an avenue of four rows of trees from the castle to Perth, some 20 miles away! One of the gardeners employed at the time was John Reid, who later wrote The Scots Gard’ner, the first Scottish gardening book published in 1683.

The 2nd Duke of Perth’s involvement in the 1715 Jacobite Rising resulted in estate improvements being deferred until his son, the 3rd Duke, returned to Scotland.

A ballad describes the gardens full of ‘evergreens and flowers…and the waterworks are a’ let on..’ But the formal gardens were abandoned in 1745 following the annexation of the estate after the second Jacobite Rising.

Early in the 19th century, both the parterre and formal terracing in front of the castle were re-established under the ownership of Clementina Drummond and her husband Peter Robert Willoughby.

This was principally the work of Lewis Kennedy. Kennedy’s family owned the Vineyard Nursery in Hammersmith, supplying plants to many of Britain’s finest gardens.

Earlier in his career he had been a gardener at Malmaison in France in the employment of Empress Josephine.

Queen Victoria visited Drummond Castle in 1842, she and Prince Albert ‘walked in the garden which is really very fine, with terraces, like an old French garden’