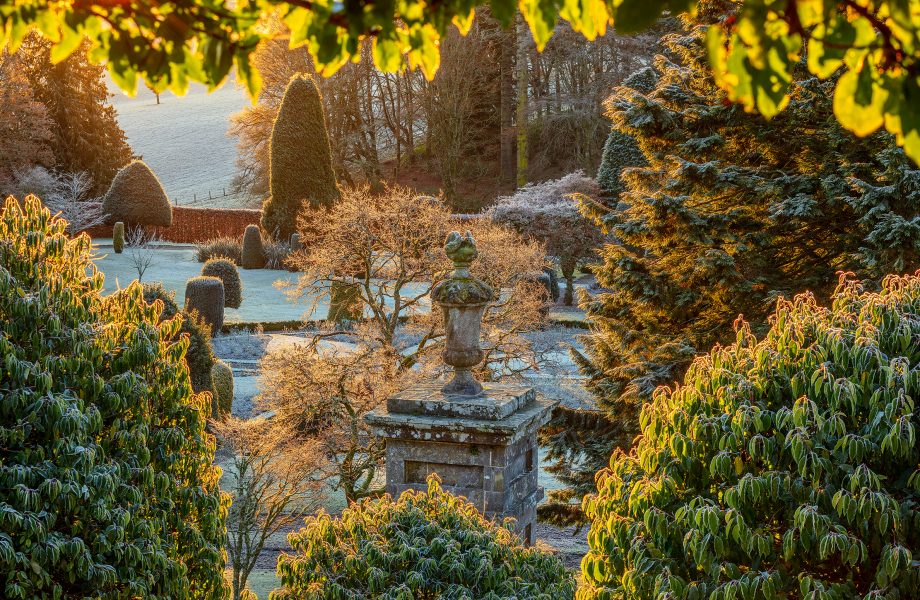 Posted at 13:28h in Uncategorised by Claire Wallace
0 Likes
Share

In the depths of winter at Drummond Castle, near Crieff, Perthshire, the crisp outlines of the 11 miles of box hedging and the perfect trim on the countless topiaried yews still take the breath away in a garden made famous by the Outlander TV series. Caroline Donald tells its story, with photographs by Clive Nichols.

For generations, uninitiated visitors have come to the top of the double steps at the edge of the cobbled courtyard of Drummond Castle and gasped in admiration at the hitherto hidden and extraordinary garden below the terraced rocky outcrop on which it stands. ‘Hearing the exclamations when you are working in the area is phenomenal,’ says Edith Barnes, head gardener since 2014, who has witnessed more than a few ‘wows’ in the 40 years she has been working there.

Give or take periods of sequestration and wartime abandonment, the formal gardens have been impressing onlookers at Drummond, near Crieff in Perthshire, since at least the early 17th century. The present layout was originally created in the 1830s under the auspices of Clementina Drummond, who inherited the estate from her father, Lord Perth, and her husband, Peter, later Lord Willoughby de Eresby. 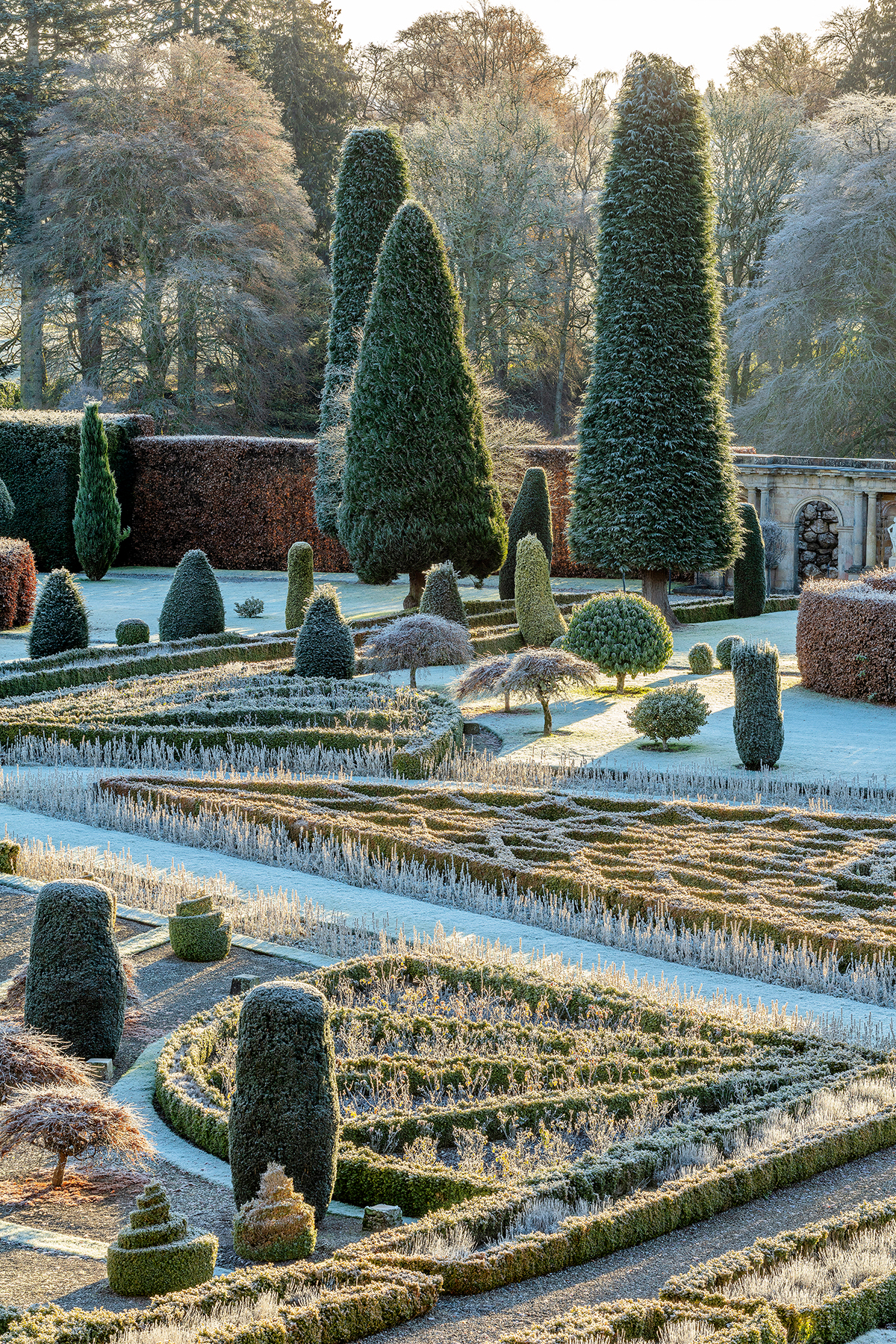 The design is attributed to Lewis Kennedy, who had worked at Malmaison in France for the Empress Joséphine before becoming factor at the Drummond estate, which probably accounts for its Franco/Italianate style.

Early photographs depict a scene positively bulging with clipped evergreens, but the 12-acre garden was edited down after the Second World War to something more manageable for a smaller workforce. What lies before us today is all the more dramatic, with neat specimen trees (largely Japanese acers and flowering cherries) and ranks of delightfully wonky yew topiary given plenty of space to be admired. The parterre, which is the pièce de résistance, denotes the Drummond family coat of arms, Scots thistles and daggers, and its traversing paths create a saltire, centring on a recently restored stone obelisk sundial dating from 1630.

Normally attracting 28,000 visitors annually, the garden gates have been closed this year because of Covid-19. But spare a thought for Miss Barnes, who was on her own during the three months of the first lockdown. There were 5,000 antirrhinum plug plants to put out, bedding to be transferred to the stone planters on the terraces, 64 beds of roses to prune, vegetables to get going in the walled garden, glasshouses full of indoor plants to keep watered, plus all the weeding and hoeing. 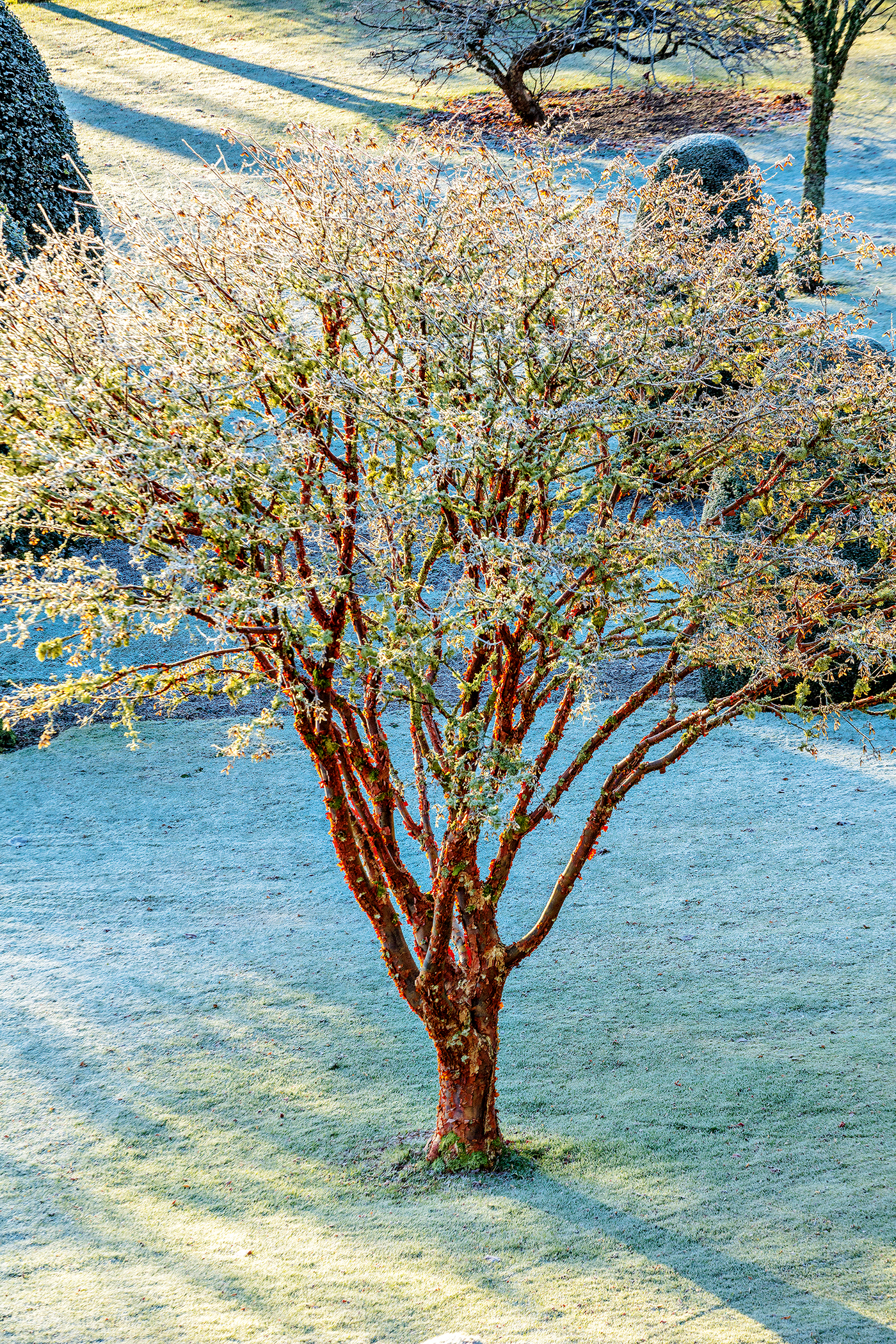 Despite this, she says she quite enjoyed going back to basics. ‘It is what everybody hates doing, but, for me, to achieve a crispness and make the place better, that is the important part. The whole point of gardening is the beauty of the finished result.’

That crispness she is after is key for, if you took away the summer notes of red, yellow and pink roses in the parterre (Evelyn Fison, Top Rose and Free Spirit, respectively), the purple haze of Lavender Hidcote lining the central path or those antirrhinums, also in yellow, red and pink (and white) — the colours of the Drummond family crest — you might hardly notice their absence.

Colour, other than the many shades of green, is provided by the likes of golden yew and the changing foliage of the maples, but outline and texture are all here and the garden looks as impressive on a wintry day as it does in at its crescendo in August.

Although Drummond has long been something of secret jewel in Scotland’s horticultural crown, these days a rather different audience is turning up, too, often dressed in plaid and clutching a fake sword, for the formal garden served as Versailles during the reign of Louis XV in the internationally popular bodice-ripping time-travel series Outlander. Rather than being interested in Drummond’s history or what a particular plant might be, ‘all you get asked all day is where they filmed the scenes,’ says Miss Barnes. Apart from covering up a clump of New Zealand flax on one of the terraces used for a sword fight, the Outlander film crew was not that bothered about period detail.

The team behind Rob Roy, the 1995 film starring Liam Neeson, were rather more on the case when they used Drummond as the home of the Marquess of Montrose. Just in time, Miss Barnes caught someone about to dig out a prunus as an arboreal anachronism, so a compromise was met and they made a mesh pyramid and stuck boxwood cuttings in it to disguise it. The day — and the prunus — was saved. 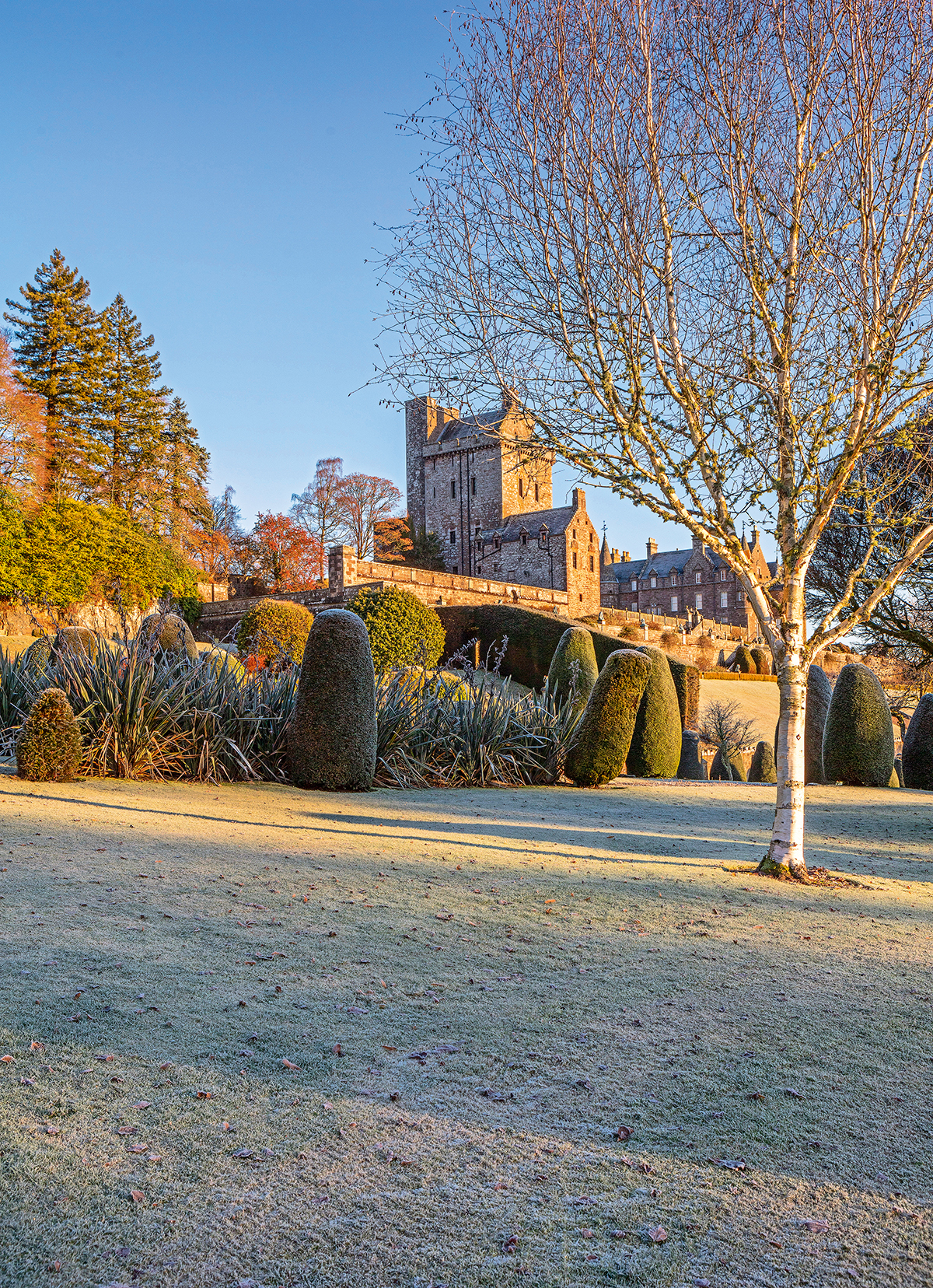 Luckily, there were no scenes near the two 72ft-high copper beeches planted by Queen Victoria to commemorate her visit in 1842, as they would have been rather more difficult to disguise. (One has since come down, in the storms of May 2012.)

The wider estate at Drummond is owned by Baroness Willoughby de Eresby, who inherited from her father, the 3rd (and last) Earl of Ancaster, but the castle, which is not open to visitors, gardens and immediate parkland are run by the Grimsthorpe and Drummond Castle Trust, set up in 1978.

Lady Willoughby, who has no children, is the chair and Lt-Col Sebastian Miller, her first cousin once removed and heir presumptive (together with Sir John Aird), is managing trustee and accompanies us as we walk round the garden. Brought up at Ardverikie, on Loch Laggan, he would come to Drummond during school holidays, where Miss Barnes, a former FITASC clay-shooting world champion, taught him and his brother how to shoot. 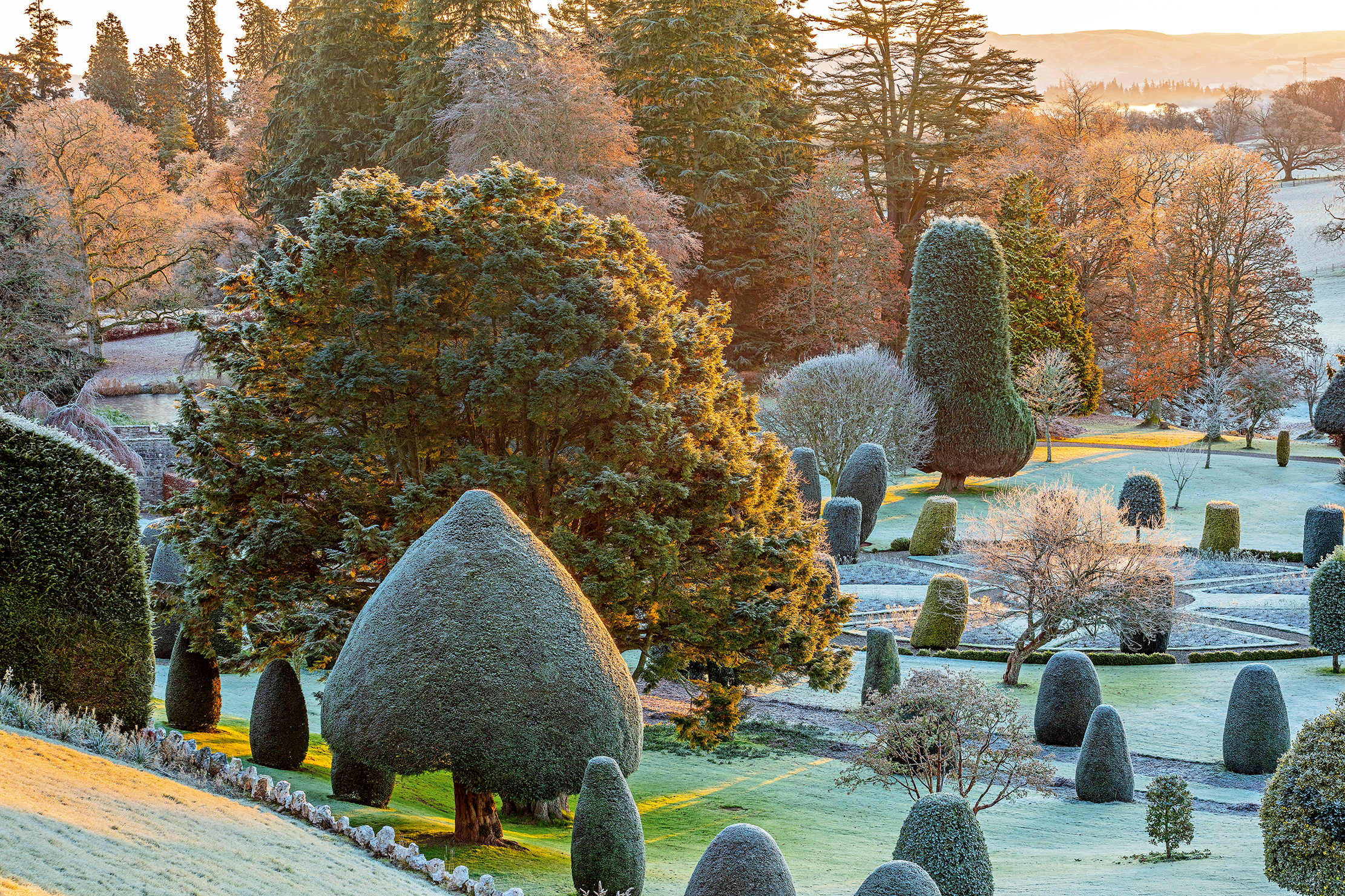 With the lack of visitors during 2020 has come unforeseen opportunity. It has been the perfect time to get the castle roof fixed and for Miss Barnes and her post-lockdown team of two to crack on with noisy hedge trimmers and mowers, without having to pack up by opening time. They’ve been tackling the box blight that is rife, getting rid of the dead wood at the centre and hacking hard back at one side to reduce its width and allow air to circulate, before feeding with a mixture of mushroom compost and their own. Once recovered, the top and other side will be further reduced.

By the time the garden re-opens, the box should be presentable and Miss Barnes will be ready once more to point out where the sword fight in Outlander was shot.

Drummond Castle Gardens, Perthshire, is hoping to re-open for Easter weekend in 2021, then daily from May 1. All dates depend on latest rules — check www.drummondcastlegardens.co.uk for updates.